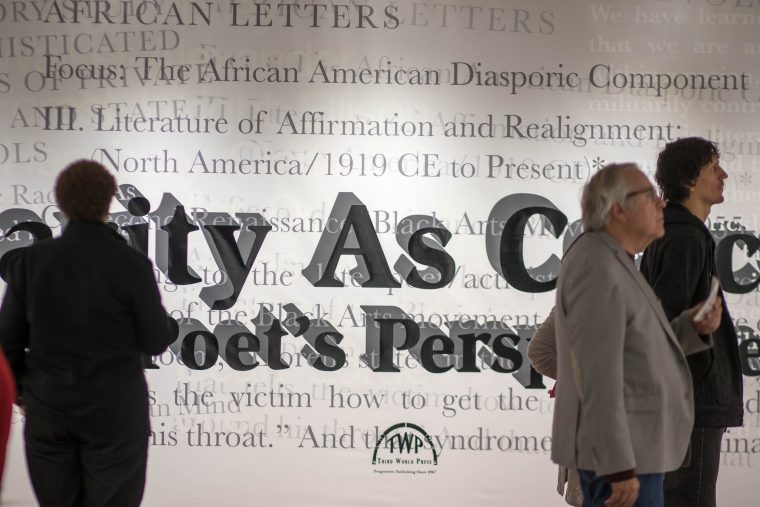 March 12, 2018 | 0 Comments
Big Car-commissioned collaboration Carl Pope: Mari Evans opens this week in Qatar
Indianapolis — Big Car Collaborative is sharing the work of Indianapolis artists on the world stage as an exhibit commissioned and co-curated by the nonprofit arts organization travels to Qatar this week. The exhibit — inspired by and co-created with Indianapolis poet Mari Evans — will be on display at the Virginia Commonwealth University campus in Doha starting March 16.
Carl Pope: Mari Evans, which opened at Tube Factory artspace in 2016, honors the life and legacy of Evans — an Indianapolis-based poet, writer, and artist. She died just over a year ago at age 97. Shauta Marsh, director of programs and exhibitions at Tube Factory, worked with Indianapolis-based artist Carl Pope and Evans herself to curate the multifaceted exhibit.
Virginia Commonwealth University brought Marsh to Qatar to attend the opening, share with students and others about the work and tour Doha, a city known for its focus on art. “I’m excited that Mari’s legacy continues,” says Tube Factory artspace Director of Programming and exhibitons. “I am especially thankful to Carl Pope whose work and application of Mari’s ideas in his work, and that of Carl’s twin sister, Karen Pope‘s writing, translates so well to an international audience. Few artists can do that.”Big Car Collaborative designer Andy Fry collaborated with Pope on the wall-sized text pieces related to Evans’s book of essays, Clarity as Concept: A Poet’s Perspective. The exhibit also features photographs highlighting the history of black culture in Indianapolis, portraits of Evans, and video from The Black Experience television program produced by Evans in the 1970s. Evans, one of the founders of the Black Arts Movement and longtime Indianapolis resident, published her first work “Where Is All the Music” in 1968 followed by “I Am a Black Woman” in 1970. During this time, Evans also worked as a producer, writer, and director of “The Black Experience” (1968-1973) — a history documentary that aired on prime time in Indianapolis.
0
Share