For the past two years, Big Car Collaborative has built parklets in Indianapolis that consist of temporary and mobile wooden structures. One of these parklets was developed in partnership with Indy Convergence, an Indianapolis based multidisciplinary arts nonprofit located in the Near Westside. This temporary parklet was setup in front of Indy Convergence’s community artspace at 2611 W. Michigan St.

The process of planning the parklet took a few months and required permits from the city. The permits necessary to accomplish this project came from the Department of Public Works, which has a history working with Big Car in other public spaces such as Spark Monument Circle. After obtaining the permits, Big Car staff installed the parklet in front of Indy Convergence a few days prior to the Near West Flow Fest.

Parklets have various configurations; for example, this particular parklet has 10 small planters with a variety of Indiana native plants. In contrast to the conventional setup of a parklet, the West Michigan Street parklet features two picnic tables with parasols as opposed to petit bistro tables. The parklet occupied two parking spaces on West Michigan Street, which served as a traffic calmer and an extension to the sidewalk where people were able to gather – two goals that Indy Convergence accomplished with the parklet in front of their building.

The West Michigan Street parklet was first used during the Near West Flow Fest, attracting people to sit, chat, eat and drink refreshments available during the festival. Days after the festival, people of the Near West community continued to use the parklet for rest breaks while passing by Indy Convergence or while attending an event at their art space. The parklet’s permit from the City was in effect from August 1 to November 6, 2017. After the permit’s expiration date, Indy Convergence stored the parklet for winter with hopes of bringing it out again in the summer. 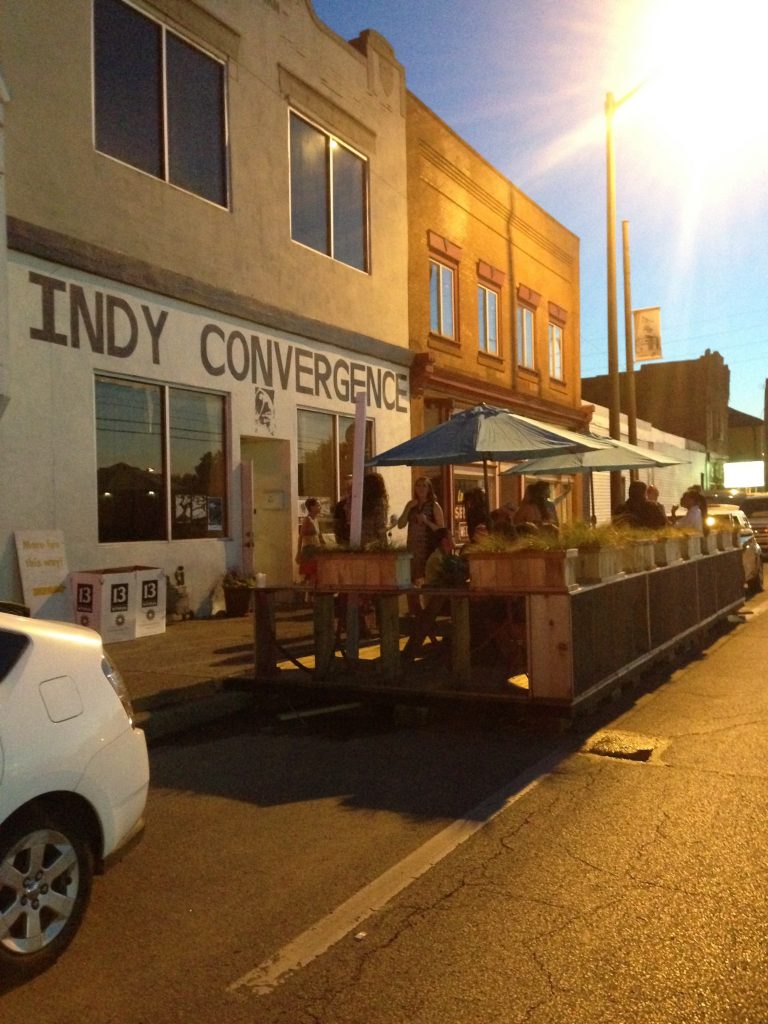