On September 11th, 2018, Rolls-Royce partnered with Big Car Collaborative for their day of volunteering at their Indianapolis campus at the 546 S. Meridian. Rolls-Royce is a multi-faceted company with over 4,000 employees in the Indianapolis area. The company focuses on aerospace and automobile manufacturing, assemblage, quality testing. You can read more about the company from their website.

Between Rolls-Royce’s volunteers, two teams of 50, and Big Car staff artists we were able to create a massive 60 ‘ x 24’ new public mural. A total of 24 individual 4’ x 8’ panels were painted for this project. Currently, the mural is still in the works to be installed at the underpass north of Madison and South St, one block away from the Rolls-Royce corporate office and aircraft engine museum.

Creative Director of Big Car Collaborative and one of the designers of the Rolls-Royce mural, Andy Fry, gives some insights into the mural’s design process and collaboration with Rolls-Royce designer Keith Barnett:

What was the design of the Mural?

The design is an abstracted Rolls-Royce jet engine, repeated, with shifts in the colors surrounding the center axis of each engine. The shifts in color are intended to evoke a sense of the circular motion of the engine.

Where did the idea come from?

The idea was inspired by art provided by Rolls-Royce, the engines that Rolls-Royce builds, as well as the place we hoped to install the mural, under a bridge near the Rolls-Royce HQ. I sought to evoke motion and sense of dynamism by using a shifting color scheme as people walked, biked, scooted or drove by the mural under that bridge.

What was the design process of the Mural?

In this case, we worked with the senior designer at Rolls-Royce, as well as the VP of Government Relations, to get a sense of the company and its mission. Of course, I was already familiar with the brand Rolls-Royce, but we were able to go on a tour of the design museum on their campus, which was visually quite inspiring. There were scale models of some of their most famous engines with cutaway views to show their inner workings. Though the mural is a simplified, abstracted version of a jet engine, I think knowing how complex and beautiful the insides actually are informed the final design.

I was also inspired by the effect, or consequence, that these engines have had on our modern world – how being able to travel all over the globe reliably has enriched our daily lives in countless ways.

Did Big Car and Rolls-Royce collaborate on the design together?

The design was a collaboration between me and Keith Barnett, the in-house designer at Rolls- Royce. He provided us with icons he had created (such as the jet engine that we ended up using) and other graphics relevant to Rolls-Royce’s work, as well as artistic direction for the project, and a color pallet. I lifted elements and ideas from a draft proposal that Keith had made as well. 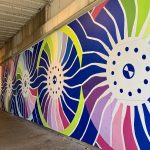 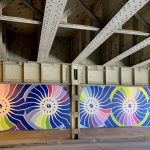 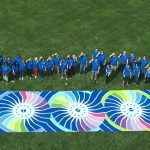 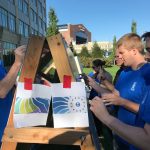 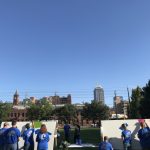 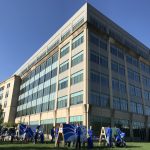