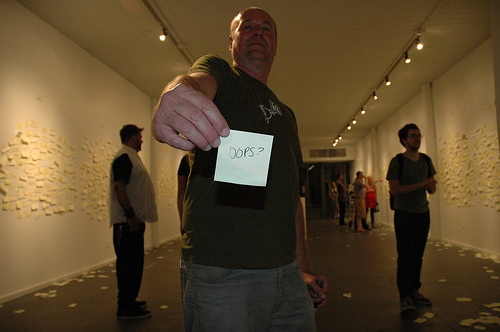 First of all — and mainly — Surrealism & various Surrealists are the main influence on Big Car. And like Surrealism, the origins of Big Car were literary. When I met Jim Walker and Anne Laker — a decade before we formed Big Car — we were all active in Indy’s “literary scene”. I published a Surrealist-influenced small press ‘zine called “pLopLop” (inspired by Max Ernst’s creature-character Loplop “superior of the birds”).

Jim Walker’s poetry appeared in issue #7 (1995). That same year, I met Anne Laker when we both read our poetry at a Fluxus event at the IMA to celebrate a massive exhibition by video artist Nam June Paik. Although it was not advertised as a Fluxus event it became one in the performance, as I had a friend fax my text and pLopLop promos via the machine made by Paik known as “The Couch Potato”. Over the years our paths crossed a few times and in retrospect I can see how certain events and collaborations led inexorably to the formation of Big Car. A multimedia happening at the Fountain Square diner with spoken word and short films projected or a similar happening at the Writer’s Center — the first of many times where various audio/video configurations were choreographed to enhance the environment. And when we finally had our own space in the Murphy Art Center, we knew how to make events memorable, our own modern versions of Dada festivals.

Jim’s Surrealist influence manifested itself first in his poetry and later in his collage work. Surrealism impacted my writing somewhat but I felt its influence most powerfully in methods of collaboration and transformation. I’d take paper and pens to parties and clubs and teach people how to play the Exquisite Corpse game with its infinite variations and possibilities for fun, creative exploration. Soon there were others who embraced the game and hosted Ex corps parties — we even came up with a new name, via invisible collaboration — and called them Flap Action Brain Splashes. Once other friends and acquaintances began to initiate these games, the communal spirit of Surrealism became real and palpable.

We recognized Fluxus as a playful, experimental nonacademic 20th century art movement but it wasn’t fully embraced by Big Car until we began to focus on socially engaged art. The Fluxus scores were distributed, performed and documented as part of Big Car’s “Year of Fluxus,” with performances at the State Fair and other unlikely venues.

An interview with Miranda July led me to “Learning to Love You More“, the book she co-authored with Harrell Fletcher. One first Friday I mentioned the book to Jim and a few months later — Mr. Fletcher was almost magically in Indy collaborating with Big Car on a Spirit and Place event — thanks to Jim’s knack for contacting creative folks and getting them involved with Big Car projects.

A Question of Influence: What is it? how does it work?
The mysteries of timing: Who influenced Big Car by collaborating with us?

Big Car never keeps our influences secret. If we’re into something, we will let you know about it (and we’ll find ways to get everyone involved). Our earliest multimedia events embodied the influences of Dada and Surrealism with spontaneous music performances, poetry readings, art displays and film projections. Our most recent adventures are in the realm of socially engaged art with an emphasis on creative ways to improve communities and inspire individuals. We’ll continue to explore these and other Big Car projects, influences, adventures and collaborations via essays, interviews, memoirs, archival material and documentation. Stay tuned.

Visit this page for a comprehensive list of Big Car’s influences.