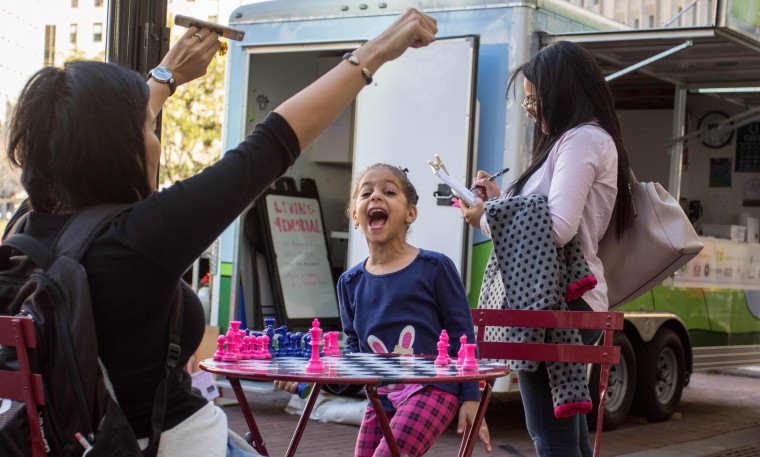 While this year was one filled with some big transitions — including moving our home base to the Garfield Park neighborhood — we accomplished much as the city’s only full-time socially engaged art and placemaking organization. In 2015, we reached more than 30,000 people, provided part- and full-time work to more than 50 artists, sparked major investment in a long-overlooked area of the city, and helped bring vibrancy to several underutilized public places near our waterways and in the heart of Downtown.

But the most important outcome of our work was helping so many people feel happy while getting creative. We’re glad our projects brought smiles to people’s faces. We’re glad the free opportunities to celebrate and participate in art and play helped folks feel closer to each other. And we’re glad our events helped us all better appreciate this place we call home.

These important accomplishments — and the list below — were all made possible thanks to our donors and partners, board and staff, volunteers and neighbors, and artists and performers who brought their incredible ideas and energy into the mix. If you’d like to get involved, email us at email hidden; JavaScript is required. If you’d like to help by making a donation, it’s easy to do here.

Here’s a chronological list of Big Car’s highlights from 2015:

At The Show Room and Listen Hear: This pair of pop-up cultural spaces in a mostly vacant retail strip in the Lafayette Square Mall area featured social practice art projects such as an instruction-based interactive show, a gallery in a bathroom, and a slate of sound art programming through May of 2015. Note: the Listen Hear sound art space concept will transfer to our new space in the Garfield Park neighborhood in early 2016.

Placemaking with Reconnecting to Our Waterways: With support via the Kresge Foundation, Big Car hired Alan Goffinski as the ROW Creative Placemaker. Alan and staff conducted placemaking workshops for artists and neighbors, and wide variety of eclectic outdoor public social events (from a flash mob in Broad Ripple, to a Day of the Dead celebration in Fountain Square, to a leaf jump along Fall Creek), drawing 450 people. Read more here.

Building with Big Car: Mentored by teaching artists, a dozen teens from the TeenWorks program experienced art and placemaking firsthand by working together to create furniture and sculptures made from invasive honeysuckle harvested from Bean Creek in the Garfield Park neighborhood, and painting sculptures to be used as part of parklet seating at Spark Monument Circle. See photos here.

Music at the Texaco: This ALL-IN Block Party drew 200 Garfield Park neighbors for live local music of many genres at a vacant former gas station, as a way of leveraging community pride, connections among neighbors, and economic development. A new, full-time commercial use of the old gas station is in the works. ALL-IN is a program of Indiana Humanities.

Wagon of Wonders: Designed collaboratively by Big Car artists on the platform of an ice fishing trailer from Minnesota, this mobile art gallery, pop-up public space, and mobile bait and tackle shop (used for Reconnecting to Our Waterways placemaking programming) features interactive art activities, a tiny library with a fold-out reading desk, and commissioned exhibits by Indianapolis artists Beatriz Vasquez and Casey Roberts. The Wagon reached 6,500 in its first six months.

Spark Monument Circle: With funding from the NEA via the City of Indianapolis, Big Car led an 11-week placemaking project in the city’s main public plaza, invigorating the space with people-centric infrastructure and daily programming reaching 22,000 residents, workers and visitors from around the world — while also testing out the city’s plans for a permanent renovation of the Circle area.

TEDxIndianapolis: Keep It Simple: For the fourth year, Big Car and our partners produced this day long-conference of ideas, at the University of Indianapolis, bringing in Australian placemaking expert David Engwicht to speak, among others. Attended by 500 people, the event included a Big Car-designed, simplicity-themed interactive exhibition at the UIndy art gallery for the entire month of October.

5×5 Idea Competition at Tube Factory: In November, Big Car hosted its round of this arts ideas competition at Tube Factory artspace in the Garfield Park neighborhood — our first event in the building still under renovation. More than 200 people attended, hearing ideas for improving livability through art. A coalition of foundations provided the winning intergenerational team, Arts for Learning, with a $10,000 prize for their community story-gathering idea. We also gave the other presenting teams a $500 stipend.