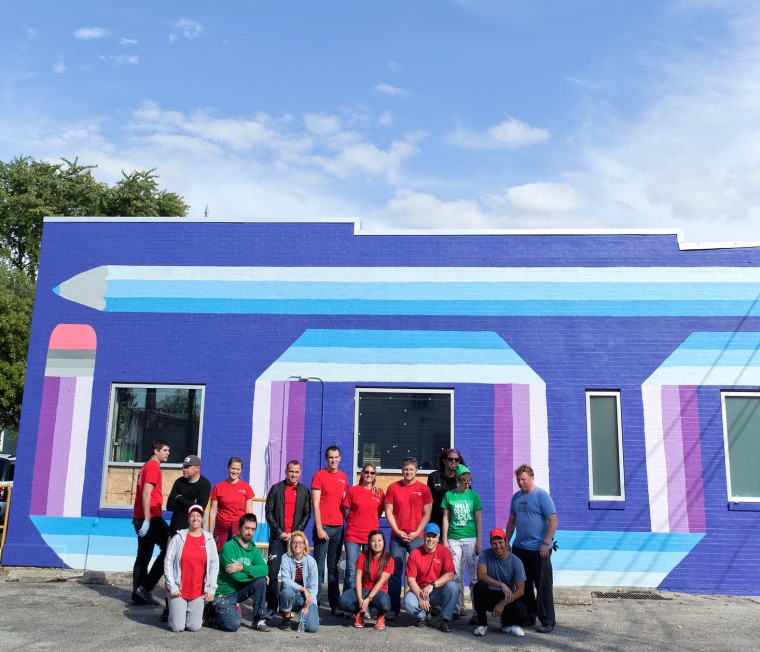 Two Indianapolis-based foundations recently announced major gifts to Big Car Collaborative for our Garfield Park Creative Community initiative. Our artist-led non-profit will use the funds to renovate and occupy two formerly vacant buildings in Garfield Park as community art spaces to leverage cultural and economic revitalization of the near southside neighborhood.

A $250,000 contribution from the Allen Whitehill Clowes Charitable Foundation will be used for renovation and furnishing of The Tube Factory artspace (above after 2015 Lilly Day of Service) at 1125 Cruft St., and Listen Hear, at 2620 S. Shelby St. A two-year $125,000 grant from the Nina Mason Pullman Charitable Trust will be used for staffing and programming when the two spaces open in early 2016.

Tube Factory is Big Car’s new permanent long-term home base featuring community gathering space, contemporary art exhibition area, and a cooperative workshop. Listen Hear is a venue for sound art and community radio, with a mini-laundromat and retail offerings. The Garfield Park Creative Community will also include affordable artist housing and art projects throughout the neighborhood in its next phase.

“We’re thrilled about these two major gifts and the impact this will have on our community,” executive director Jim Walker said. “The Tube Factory will be an anchor for a neighborhood full of art experiences. And it will give us a home base for placemaking and socially engaged projects around the city and beyond.”

The Allen Whitehill Clowes and Pulliam Trust grants add to the almost $800,000 already raised toward the $1.5 million goal. Supporters include a Community Development Block Grant from the U.S. Department of Housing and Urban Development via the City of Indianapolis Department of Metropolitan Development ($466,000), the Efroymson Family Fund ($150,000), Lilly Endowment, Inc. ($50,000); Christel DeHaan Family Foundation ($35,000); Indianapolis LISC ($20,000), Howard Schrott and Diana Mutz, Ursula David, The Madeira Fund, The Nicholas H. Noyes Jr. Memorial Foundation ($10,000 each), and the Arthur Jordan Foundation ($2,500), as well as a major in-kind contribution from Blackline, the lead architect firm on the Tube Factory project. Riley Area Development Corporation is a key partner in the Garfield Park project as well.

Additionally, the Indianapolis Neighborhood Housing Partnership (INHP) invested $75,000 in Big Car and Riley Area Development’s housing initiative to refurbish vacant and neglected properties on Cruft Street as affordable live and work homes for artists who work with the public.

With Big Car owning its buildings, the Shelby Street corridor in the Garfield Park neighborhood is the permanent home and area of focus for the organization. Big Car works as an artist team embedded in Indianapolis neighborhoods to activate public space, engage artists and residents, and help transform the built environment as part a project called Garfield Park Creative Community. The goal is to make art and creativity integral to the culture of the neighborhood.