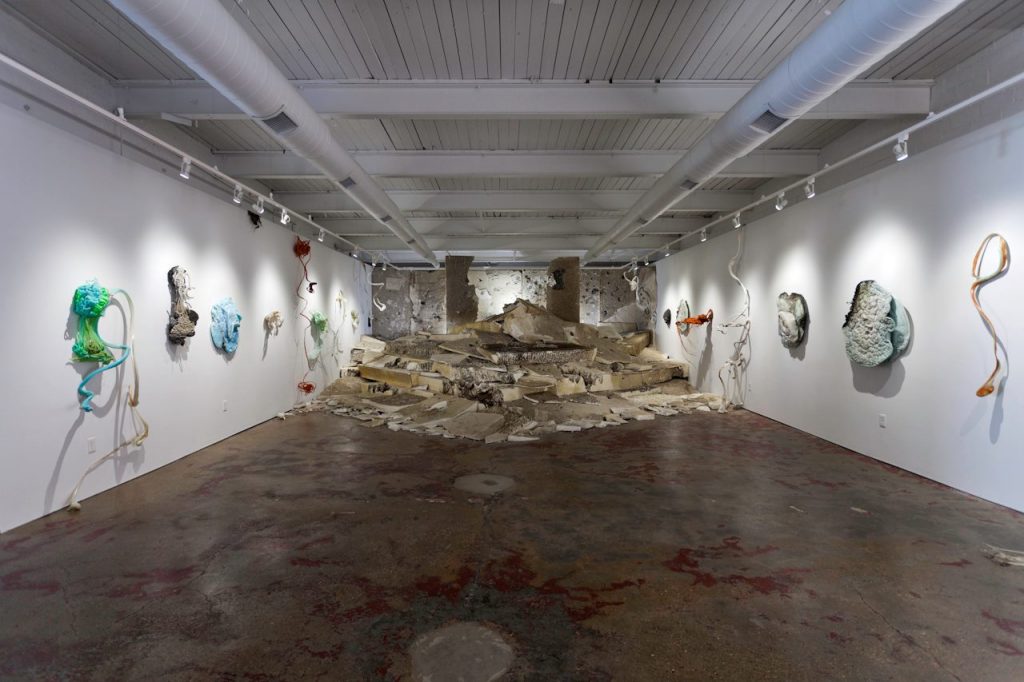 Detroit-based Scott Hocking visited Indianapolis in January 2015 and selected the former RCA Factory at Michigan and LaSalle as fodder for his installation in the main gallery in August of 2016. “It immediately grabbed me,” Hocking explained of the experience. “The RCA history was interesting enough. But the building was last used as a recycling plant, and was filled with now abandoned, un-recycled waste: plastic, paper, foam — thousands of objects.  The irony of these mountains of recyclables is that they would never be recycled. A huge pile of military grade plastic cases, with ominous stencils: ‘laser firing simulator system,’ ‘interrogation kit,’ ‘casualty evacuation kit,’ ‘tank weapon gunnery simulation system.’  Pallets of clothes and books, including dozens of old hymnals. Plastic pill and dish soap bottles strewn everywhere. Giant fragments of fast food and gas station signage: McDonald’s, Steel City, Family Dollar, Wendy’s. And a monster stack of Styrofoam slabs and wedges — melted and distorted from failed arson attempts.  The whole place was crazy and great.”

An Artist Talk – Scott Hocking on RCA and other projects from Big Car Collaborative on Vimeo.

Click here to read the full interview between Mott and Hocking.

The exhibit, curated by Shauta Marsh, was made possible by The Andy Warhol Foundation for the Visual Arts.