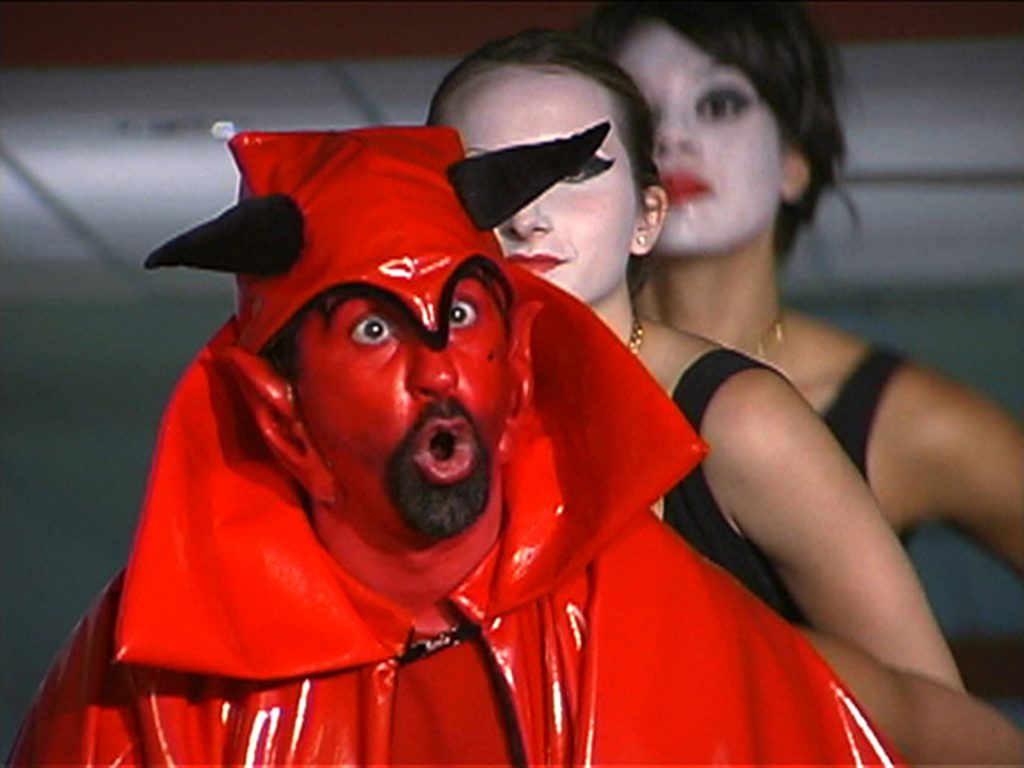 A screening and discussion of Mike Kelley’s Day Is Done. We discussed Kelley’s techniques for creating psychic distortions and the perceived relationship between the person of the artist and the artistic persona and common concepts related to the Carl Pope: Mari Evans exhibition that was on display at Tube Factory artspace.
Day Is Done is a carnivalesque opus, a genre-smashing epic in which vampires, dancing Goths, hillbillies, mimes and demons come together in a kind of subversive musical theater/variety revue by artist Mike Kelley. Running over two-and-a-half hours, this riotous theatrical spectacle unfolds as a series of episodes that form a loose, fractured narrative. The video comprises parts 2 through 32 of Kelley’s multi-faceted project Extracurricular Activity Projective Reconstructions, in which trauma, abuse and repressed memory are refracted through personal and mass-cultural experience. The source material is a series of high school yearbook photographs of “extracurricular activities,” specifically those that represent what Kelley has termed “socially accepted rituals of deviance.” Kelley then stages video narratives around these found images.
In Day Is Done, these restagings take the form of “folk entertainments” that Kelley memorably subverts. Featuring characters such as Motivational Vampire, Morose Ghoul and Devil/Barber, much of the action—antic song-and-dance numbers and dramatic scenes, with Satan as emcee—takes place in a generic school gymnasium and a wooded landscape.
Writes Kelley: “For this project, I limited myself to specific iconographic motifs taken from the following files: Religious Performances, Thugs, Dance, Hick and Hillbilly, Halloween and Goth, Satanic, Mimes, and Equestrian Events. Many of the source photographs are of people in costume singing or dancing, so the resulting tapes are generally music videos. In fact, I consider Day Is Done to be a kind of fractured feature-length musical…. The experience of viewing it is somewhat akin to channel-surfing on television.”
The video reconstructions were originally seen within an ambitious, sprawling exhibition of video/sculpture installations, photographs, sets, props and drawings at the Gagosian Gallery in New York in 2005; the videos were incorporated into 25 sculptural viewing stations. Writes Kelley, “My intention was to create a kind of spatialized filmic montage: a feature-length film made up of multiple simultaneous and sequential scenes playing in architectural space.”

Jillisblack talk at Tube Factory Battle of the Bands Mural