What makes for a great public space? Plenty of room, good design, a welcoming spirit, and pleasing programming. In October 2018, the City of Indianapolis cut the ribbon on a new civic space in downtown Indianapolis: Lugar Plaza, the southern doorstep of City Hall. Big Car was there with the Wagon of Wonders and other activations. Three former Indianapolis mayors dedicated the space, including Senator Richard Lugar himself.

In spring 2019, the Department of Metropolitan Development invited Big Car to work with our friend (and one of our co-founders) Anne Laker of Laker Verbal LLC to activate this big new plaza: applying our placemaking experience and expertise to create a playful vibe for “downtown Indy’s backyard.”

From May 1 to October 16, 2019, we brought Lugar Plaza to life with games, drop-in programming and bigger events like Chreece (hip hop fest) previews, percussion concerts, and movie nights. More than 6,000 people attended these programs. We enlisted program providers such as like Charlie Redd of Haven Yoga, sketch artists Ken & Roberta Avidor, and the Rhythm Discovery Center (to name a few) to present activities this year. Indianapolis City Market is also a partner.

Designed by Rundell Ernstberger & Associates, the plaza has expansive lawns, leisure swings, and a splash pad popular with kids and dogs alike — plus a great sound system, public art by ProjectOne, and perfect proximity to The Cultural Trail and Transit Center. Outfitted by Big Car with foosball, ping pong, chess, checkers, jenga, soccer goals and badminton, Lugar Plaza has been an especially good place to hang out on a summer night, with the lights of the splash pad and swing set glowing in the dark. “It’s also the best place in town to fly a kite,” says Anne.

Our surveys show: “relaxing” is the most common word people use to describe Lugar Plaza.

We’re proud to have helped bring this space to life. 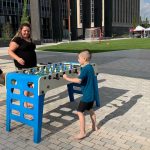 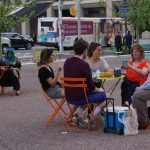 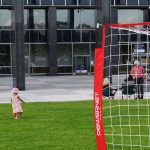 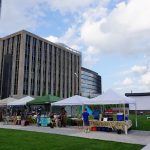 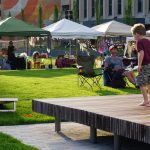 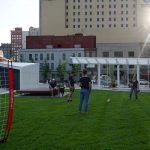 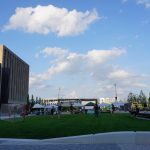 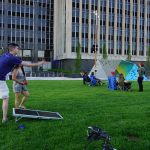 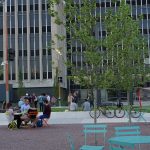 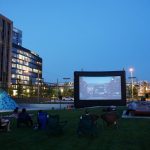