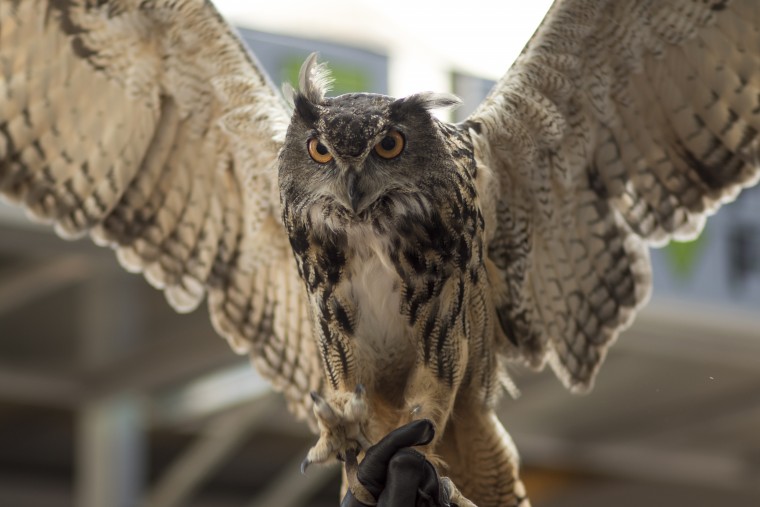 Since officially starting at Big Car four months ago as the “documentation person,” responsible for both video and photo (and more recently branching into the social media posting too, tepidly), I’ve found myself in a whirlwind of activities, people, places, happenings, noise, and music. Below are my ten favorite images from that whirlwind. 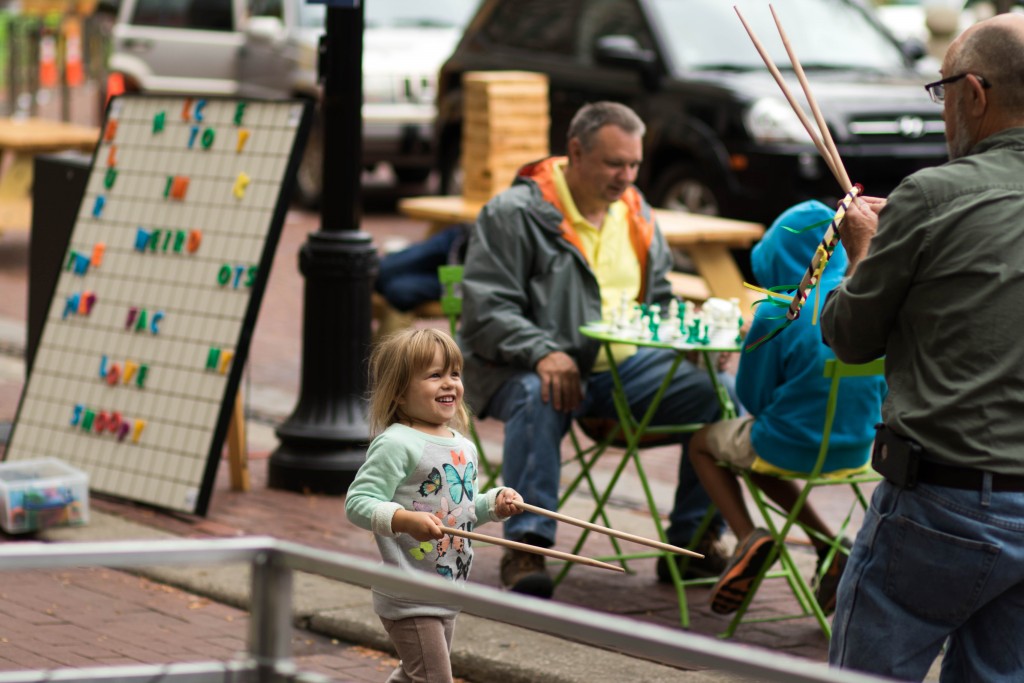 1) “A Game of Graces” – I don’t actually remember when this photo was taken down at Spark, but it’s pretty dense with information, which is a usual goal when documenting events. I found it while searching through folders for this post, and you can’t help but stop when someone’s face is so obviously “lit up” like that. I tend to shoot low aperture, which creates that blurry background. I like it because it isolates the subject in a super intentional fashion. What’s more, I always tend to like imagery that “feels cinematic,” or has some element of before and after to the frame. Here this girl clearly looks “accomplished,” and even if you don’t know the Game of Graces (she just successfully tossed that ring to the older man using those two sticks) you know she just did something to be proud of. 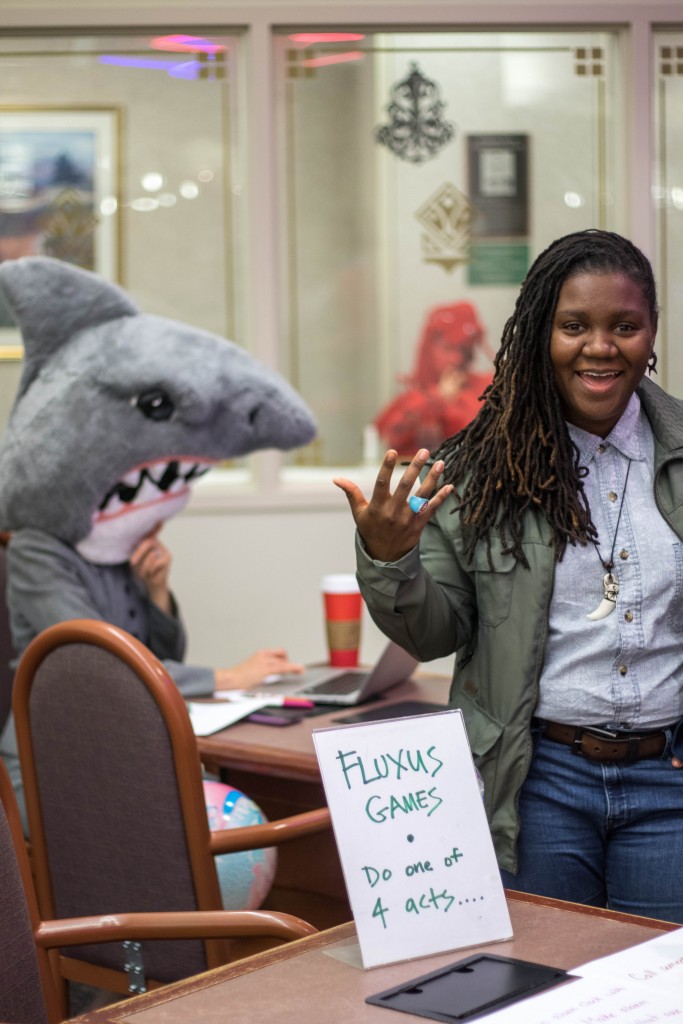 2) “Surrealist Win” – The primary reason I love this photo: that lady is Cheria Caldwell and she is a newer staff member to Big Car, like me. She vehemently objects to being photographed, and so as you can tell, here she is mid objection. I think that look on her face is fantastic. This was taken at the Spirit & Place Surrealist Party so you can also see Anne Laker dressed with a shark head. That was one of the best surprises of the night. What you can’t make out, is the random lady dressed as a lobster eating a barbie in the background. It was an astonishingly fun night. We made paper hats, after Hugo Ball (who yes was a Dada artist and not Surrealist, but whatever). 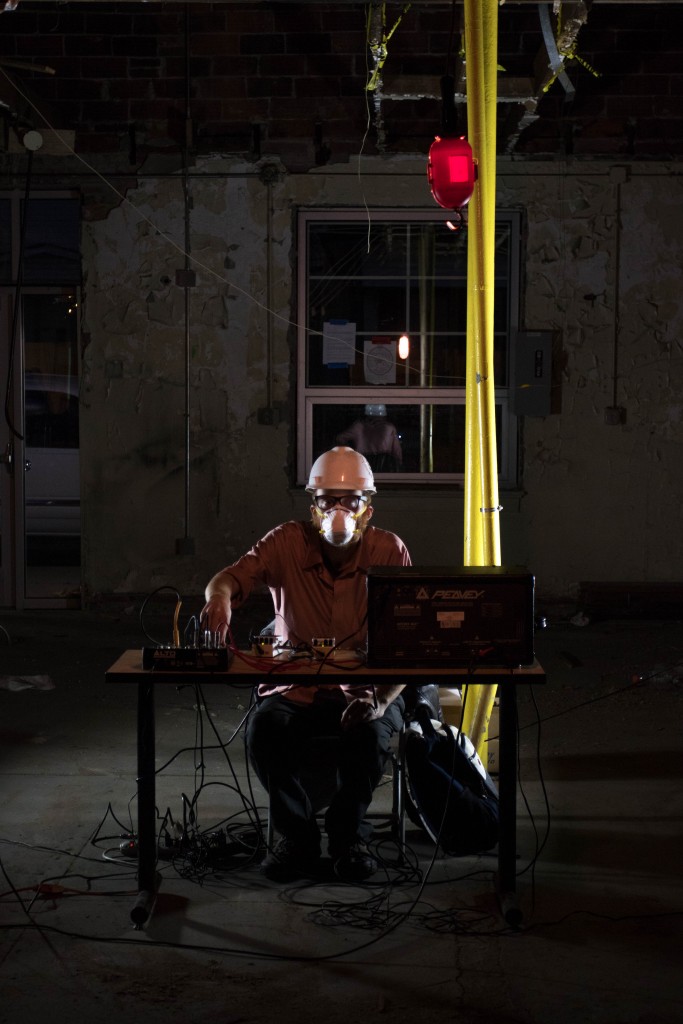 3) “John at the Tube” – This one I’m super proud of. It’s the most recent of the 10 images here, and it’s showing John Flannelly, a spectacular local sound artist, performing alongside the Dream Indy 5×5 Spirit and Place event at the Tube. What I’m primarily proud of, apart from it being a nicely framed shot of someone talented, is that I lit this shot during the day when the room was filled with daylight, with no time to wait to test the lighting. All I knew was that I wanted it to mix colors, and to seem to be carved out of the dark background with subtle but highly contrasted lines. 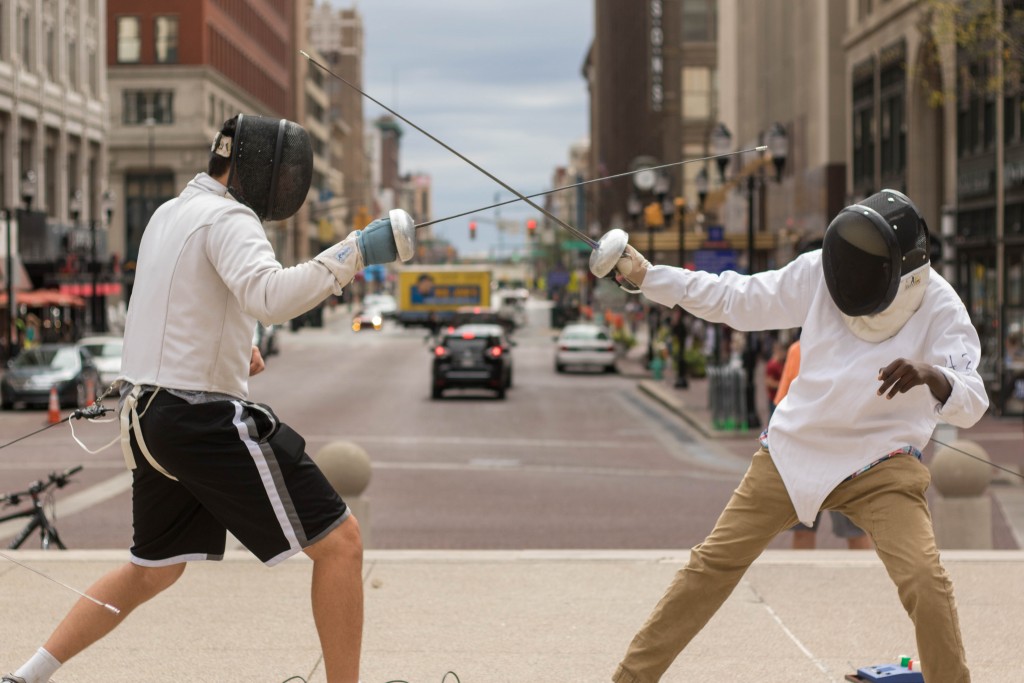 4) “Fencers on the Circle” – One of the coolest parts about Spark was the absolute randomness. It was particularly nice towards the end of the two and half months, because it was a nice way to break up the regular programming (I was almost down there everyday for a solid two and half months, so even absurd things were starting to feel ordinary). Here it was some random Saturday and this fencing club requested they bring their stuff down and put on live demonstrations. Not only was it just fantastic imagery to photograph, but it was a really fun environment to be in. Here these people are, doing an arguably eccentric pastime, out in public, and they’re openly inviting people to participate and learn (fellow on the left is from the group and is demonstrating for the fellow on the right, who was just passing through the circle at the time). And all of this wasn’t our (Big Car’s) idea, they came to us. Quite enjoyable. 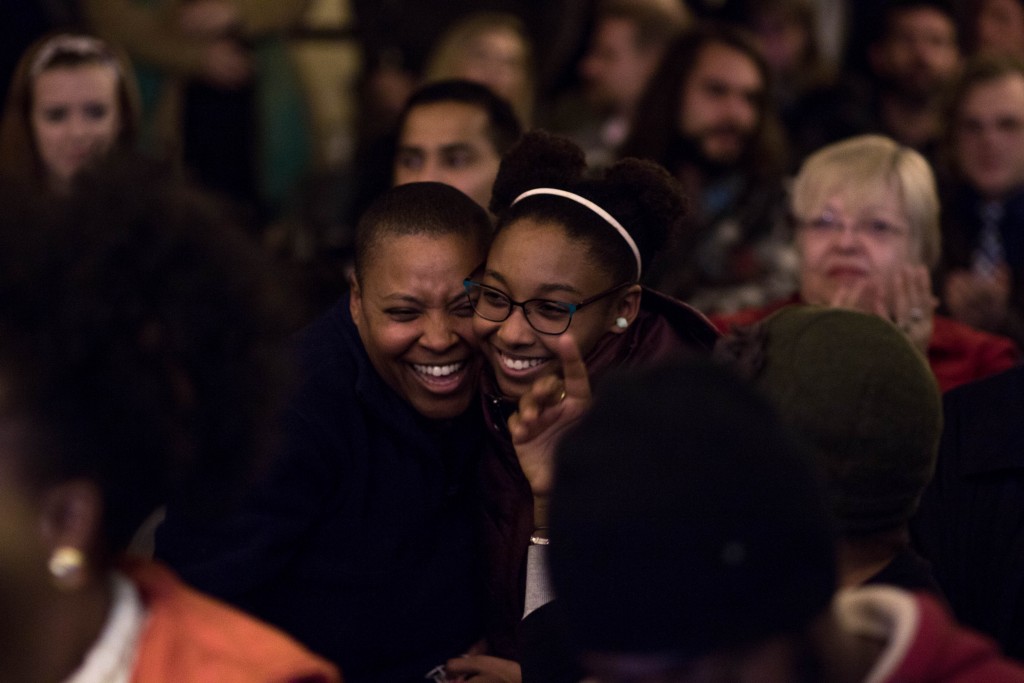 5) “The Winning Smile” – Yes that title is a pun. Sometimes a photo is about the sheer surprise you able to capture something. This was also at the Dream Indy 5×5 Spirit and Place event at the Tube. Prior to announcing the winner I tried to set up for a shot on stage of the winning pair posing in the oversized prop Big Car had made. As the announcement happened I caught a reaction out of the corner of my eye, swung right and snapped a couple pictures. The young woman on the right is one half of the pair that just won the prize. 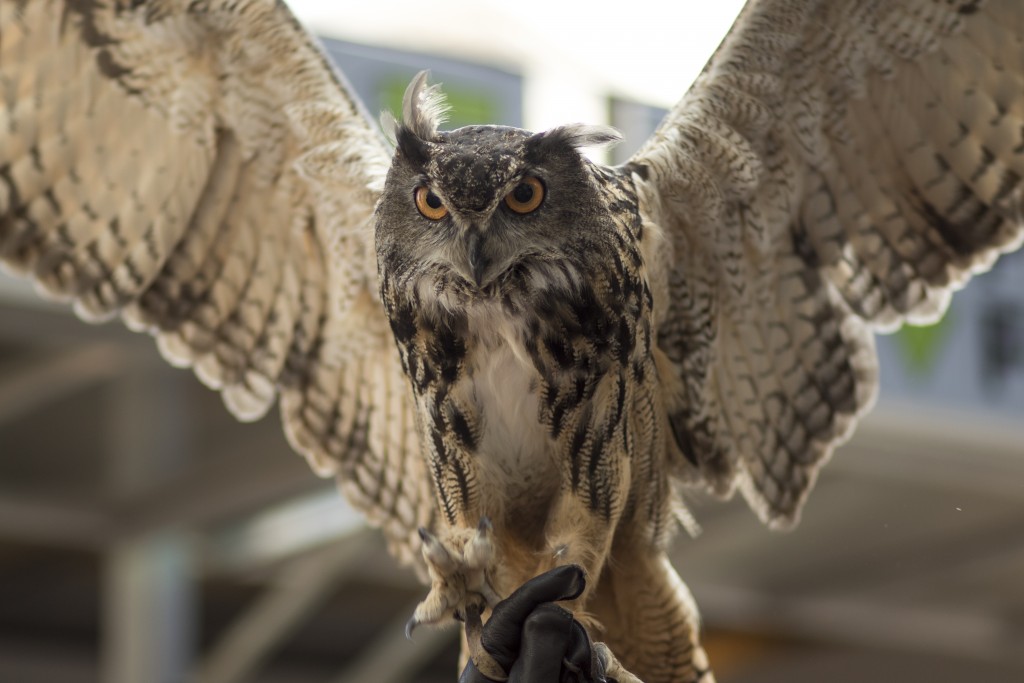 6) This is absolutely my favorite photo I’ve taken since starting at Big Car. I was just hanging out by the Welcome Wagon on the Circle when some Indy Fringe performers came walking by advertising for their respective shows. This owl was part of one nice gentleman’s act. This photo has like all the aspects of photography I strive for: strong eye contact, dynamic leading lines, slightly backlit, low aperture. My proudest image of the last few months. 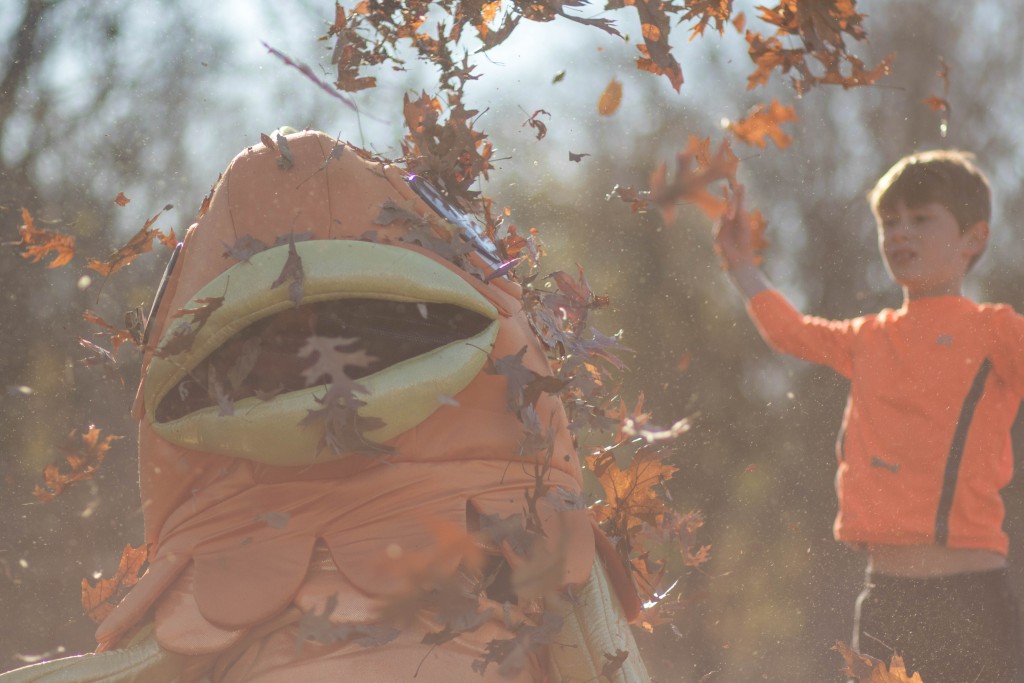 7) “Leaf Jump” – This was an event held by Alan Goffinski for Reconnecting to Our Waterways he called a Leaf Jump. To be honest I was a little cranky that day and was feeling rushed to get an overlapping second event.  But when Alan finally busted out the Big Carp, it was worth it. Talk about a photographic dream, the light was hitting the back of the pile just right, the leaves and all their particulates started flying, and the leaf pile erupted with activity. So much so that I actually started feeling better. 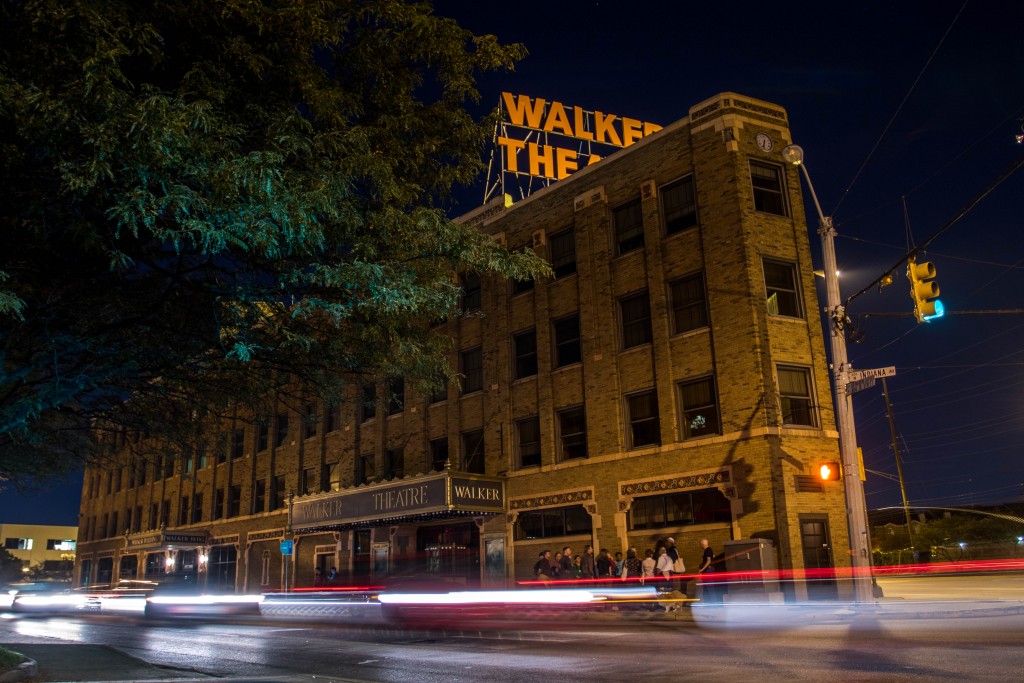 8) “Indiana Avenue Tour” – Of all the Spark events covered, the tours were by far the most challenging and the most visually rewarding. Walking backwards, rolling video, audio and capturing photos all simultaneously (I even tripped over a stone planter on this specific tour and tore some skin off of my lower back). This tour went particularly late, had a lot of good stops and stories and history. Combined with the nights coming sooner, it was kind of dark by the end of the tour at Walker Theater. Such a beautiful building, I really wanted a good photo, but my ISO was soaring as it got darker (particularly because there’s not a whole lot of direct streetlight on that corner). So in an effort to keep the ISO low I used a longer shutter and got this decent effect. 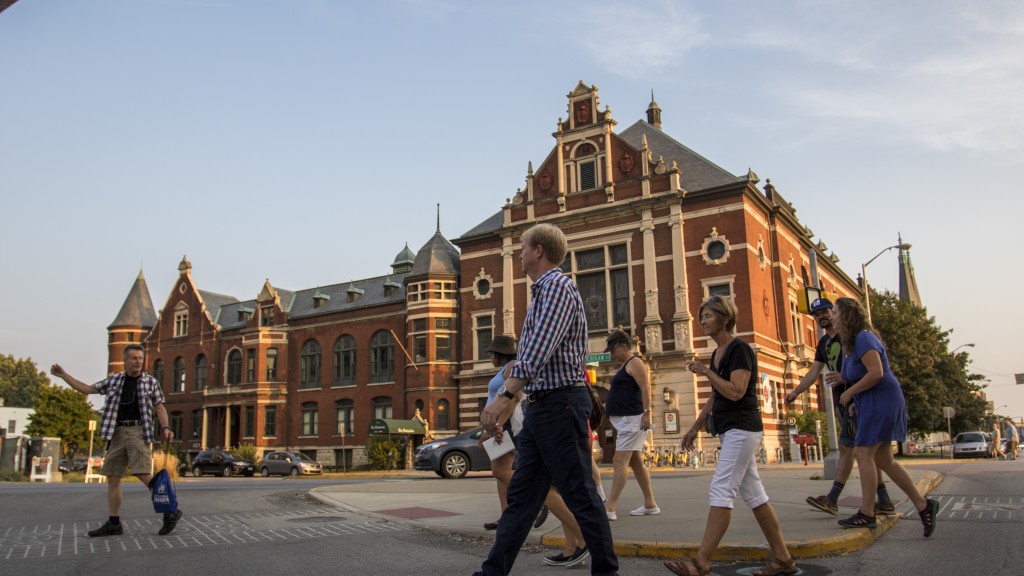 9) “The Athenaeum” – Another tour, another beautiful building. There’s actually two photos from this tour I particularly am proud of, but this one I find uncanny. Not only is it a full building shot from the middle of Mass Ave during golden hour, but I find it also entertaining that the sprawl of the tour attendees somewhat mirrors the shape of the Athenaeum from this angle. 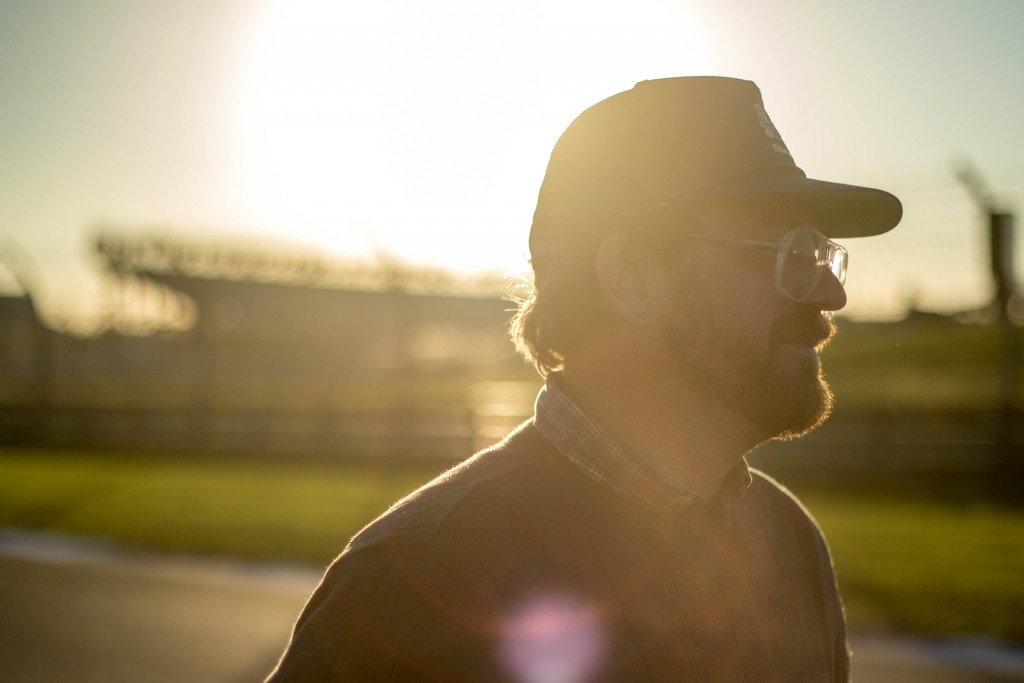 10) “Jesse Sugarmann” – This is the ultimate golden hour shot (referring to that magic hour when the light from the sun casts across the ground at just the right angle to produce some interesting color, usually near dawn and dusk). This is one of the last shots of three full days of work for Jesse, who is the artist responsible for the “People’s 500,” a piece that called for normal people to drive a full race around the Indianapolis Motor Speedway. To be honest it was the shot I’d been hoping to get all day, and it was such a relief when in the last ten minutes I got it.

So that’s a breakdown of how I shoot, what I look for, how I frame and the aesthetic I aim to capture. The most recent task I completed was to finish a video review of 2015 for Big Car (click here if you’re on your phone) and all its programming. It presents a unique challenge because obviously I did not capture the entire year myself. However, for as much as I enjoy capturing imagery, I actually find greater enjoyment in editing. So I spent a good amount of time reviewing Flickr for imagery and video of the ten projects to be highlighted, and assembled them all into folders (good editing is in organization, that is more than half the battle).

After assembling my materials, I set about creating a first cut, and it actually came together surprisingly quick. I set about creating an intro, set up Big Car and their intention, specifically their theme bringing art to people. While typing the titles it occurred to me that art and people lined up almost, which I thought was uncanny, so I let it linger. After establishing an introduction, I wanted to give the premise some validation so I found a couple interview clips stating the importance of Big Car’s mission and how easily it can be accomplished at times, which finally leads to the review of programming.

In this first cut I was just getting my content ideas on “paper” so to speak. Laying out the order of imagery for each project, beginning usually with something abstract/intriguing, then an establishing image, then a series of explanatory images or imagery that exemplifies. I also like to layer my edits so sounds start to rise before the clips that match enter the frame (called J or L cutting). One of my original intentions was to stamp each section with a logo that pertained, however that quickly proved a little confusing as some logos were partners and some logos were Big Car creations.

When re-editing, we aimed to make the text a little more explanatory, and also more concise. The music underneath remained the same, the first track is an original I found in the Big Car archives and the followup song is from Bigfoot Yancey, recorded down at Spark (the second song of theirs I’ve used, they’re really good). Lastly I like to give my videos a vague sense of a “day.” It’s a subtle way of communicating a video is coming to a close. So I like to begin with brighter shots and end with darker shots, as if the sun is setting. All in all it was a pretty smooth video to create, and it helps that it’s about a pretty fascinating group of people and all their efforts.