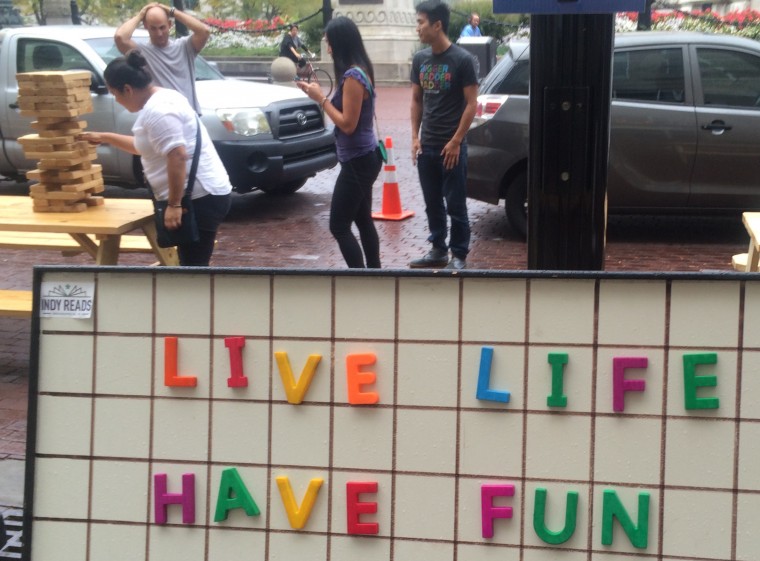 Big Car Collaborative and Indianapolis City Market — thanks to a grant from Southwest Airlines and Project for Public Spaces — are teaming up, starting this summer, to enliven the east side of downtown by connecting two primary public sites: City Market and Monument Circle. A catalytic grant, valued at $220,000 including monetary and technical support, from the Southwest Airlines Heart of the Community program will enable both Indianapolis City Market and Big Car Collaborative to jointly implement their plans to engage the community in reimagining these historic sites as key public spaces in the “heart” of Indianapolis.

The Southwest Airlines Heart of the Community program focuses on placemaking, a movement that is revolutionizing cities around the world by boosting community participation in the creation, design, and unique programming of their public spaces. Southwest Airlines believes that public spaces, whether neighborhood parks, small plazas, or downtown squares, are the true hearts of communities, as they are the places where people gather, connect, and enjoy each other and the cities they live in. The placemaking process highlights the capacity for underperforming spaces to achieve their greatest potential by becoming vibrant, authentic, functional, and well-loved places that will benefit the community socially, culturally, and economically for years to come. The Southwest Airlines Heart of the Community grant will help further the momentum of placemaking and cultural programming as vital elements to activating public places in Indianapolis, especially in the city’s blossoming downtown.

By building a shared vision through placemaking that connects City Market and Monument Circle in the developing Market East District of downtown, Big Car and City Market will strengthen connections between people and place—generating a greater sense of belonging and inclusion through the co-creation of great public spaces where everyone feels welcome and comfortable.

“The generous grant from Southwest Airlines provides City Market officials the opportunity to activate a unique space that has been dormant and without a soul for far too long,” said Stevi Stoesz, City Market’s executive director. “Working with Jim Walker and his Big Car team will enable us to create an inviting and engaging space. We have a great opportunity to compliment what is planned for the Market East District by providing valuable programming and amenities to draw residents, employees and visitors alike.”

Indianapolis is among five communities that are receiving similar grants today selected out of a highly competitive pool of more than 90 applicants, from 60 cities. Each year, Southwest brings placemaking to the cities they serve through the Heart of the Community program, highlighting the importance of “place” and encouraging communities to take part in the creation of the public places they love. For Southwest, placemaking is more than building great destinations, it is about strengthening local communities at their “heart.”

“At Southwest, we connect People to what’s important in their lives,” said Linda Rutherford, Vice President and Chief Communications Officer at Southwest Airlines. “That commitment extends beyond the skies and into the hearts of our communities through our investment in public spaces. We recognize the power public spaces have to transform communities and are excited to support the efforts to reimagine City Market’s East Plaza and Monument Circle in Indianapolis, a city we’ve been serving for 26 years.”

This grant will further the placemaking work that Big Car is already undertaking in the downtown Indianapolis area. In 2015, Big Car partnered with the City of Indianapolis on Spark, an 11-week test of creative programming and temporary infrastructure improvements at Monument Circle — funded by the National Endowment for the Arts and the Central Indiana Community Foundation. More than 45,000 visitors enjoyed flexible, public seating and upwards of 399 human-scale programming opportunities. Additionally, 85 percent of visitors reported talking to someone new during Spark. More can be found at www.circlespark.org.

“We’re very excited to be returning to downtown in partnership the City of Indianapolis and our friends at the wonderful, historic City Market,” said Jim Walker, founder and executive director of Big Car, a nonprofit collaborative of artists, designers and placemakers. “We’re thrilled to be working with Project for Public Spaces—an organization that has been a huge influence on our work, and Southwest Airlines—a company with people-focused values that we share.”

Through its multi-year partnership with Project for Public Spaces, the nation’s pioneering placemaking organization, Southwest Airlines is leveraging the power of placemaking to spur social, economic, and wellness benefits in communities across the U.S. and abroad. With the addition of the five newly announced grant recipients, the program has supported 18 innovative and transformative projects.

ABOUT INDIANAPOLIS CITY MARKET
Indianapolis City Market (ICM) feeds the community and its guests by offering distinct foods, products and services in an environment that preserves and perpetuates Central Indiana’s agricultural, architectural and cultural history. ICM was on the original Plat of the City designed by Alexander Ralston in 1821. ICM’s main Market House celebrates its 130th birthday in November of 2016. Indianapolis City Market Corporation, a nonprofit organization, is governed by a 13-member board of directors appointed by the Mayor and the City-County Council.

ABOUT BIG CAR COLLABORATIVE
An Indianapolis-based 501c3 nonprofit formed in 2004, Big Car uses creative placemaking as a catalyst to a better city. By providing and supporting unique, educational, participatory, playful and personal experiences, Big Car engages people of all ages and backgrounds in art making and creative problem-solving — inspiring them to be creative thinkers and involved, connected citizens. Our mission: We bring art to people and people to art, sparking creativity in lives to transform communities.

ABOUT SOUTHWEST AIRLINES CO.
In its 45th year of service, Dallas-based Southwest Airlines (NYSE: LUV) continues to differentiate itself from other air carriers with exemplary Customer Service delivered by more than 49,000 Employees to more than 100 million Customers annually. Southwest proudly operates a network of 97 destinations across the United States and seven additional countries with more than 3,900 departures a day during peak travel season.

Based on the U.S. Department of Transportation’s most recent data, Southwest Airlines is the nation’s largest carrier in terms of originating domestic passengers boarded. The Company operates the largest fleet of Boeing aircraft in the world, the majority of which are equipped with satellite-based WiFi providing gate-to-gate connectivity. That connectivity enables Customers to use their personal devices to view video on-demand movies and television shows, as well as more than 20 channels of free, live TV compliments of our valued Partners. Southwest created Transfarency℠, a philosophy which treats Customers honestly and fairly, and in which low fares actually stay low. Southwest is the only major U.S. airline to offer bags fly free® to everyone (first and second checked pieces of luggage, size and weight limits apply, some airlines may allow free checked bags on select routes or for qualified circumstances), and there are no change fees, though fare differences might apply. In 2014, the airline proudly unveiled a bold new look: Heart. The new aircraft livery, airport experience, and logo, showcase the dedication of Southwest Employees to connect Customers with what’s important in their lives.

From its first flights on June 18, 1971, Southwest Airlines launched an era of unprecedented affordability in air travel described by the U.S. Department of Transportation as “The Southwest Effect,” a lowering of fares and increase in passenger traffic whenever the carrier enters new markets. With 43 consecutive years of profitability, Southwest is one of the most honored airlines in the world, known for a triple bottom line approach that contributes to the carrier’s performance and productivity, the importance of its People and the communities they serve, and an overall commitment to efficiency and the planet. The 2014 Southwest Airlines One Report™ can be found at SouthwestOneReport.com.
Book Southwest Airlines’ low fares online at Southwest.com or by phone at 800-I-FLY-SWA.

About Project for Public Spaces
Project for Public Spaces is a nonprofit planning, design and educational organization dedicated to helping people create and sustain public spaces that build stronger communities. Its pioneering Placemaking approach helps citizens transform their public spaces into vital places that highlight local assets, spur rejuvenation and serve common needs. PPS was founded in 1975 to apply and expand on the work of William (Holly) Whyte, the author of The Social Life of Small Urban Spaces. Since then, the organization has completed projects in over 3000 communities in 43 countries and all 50 US states and are the premier center for best practices, information and resources on Placemaking.