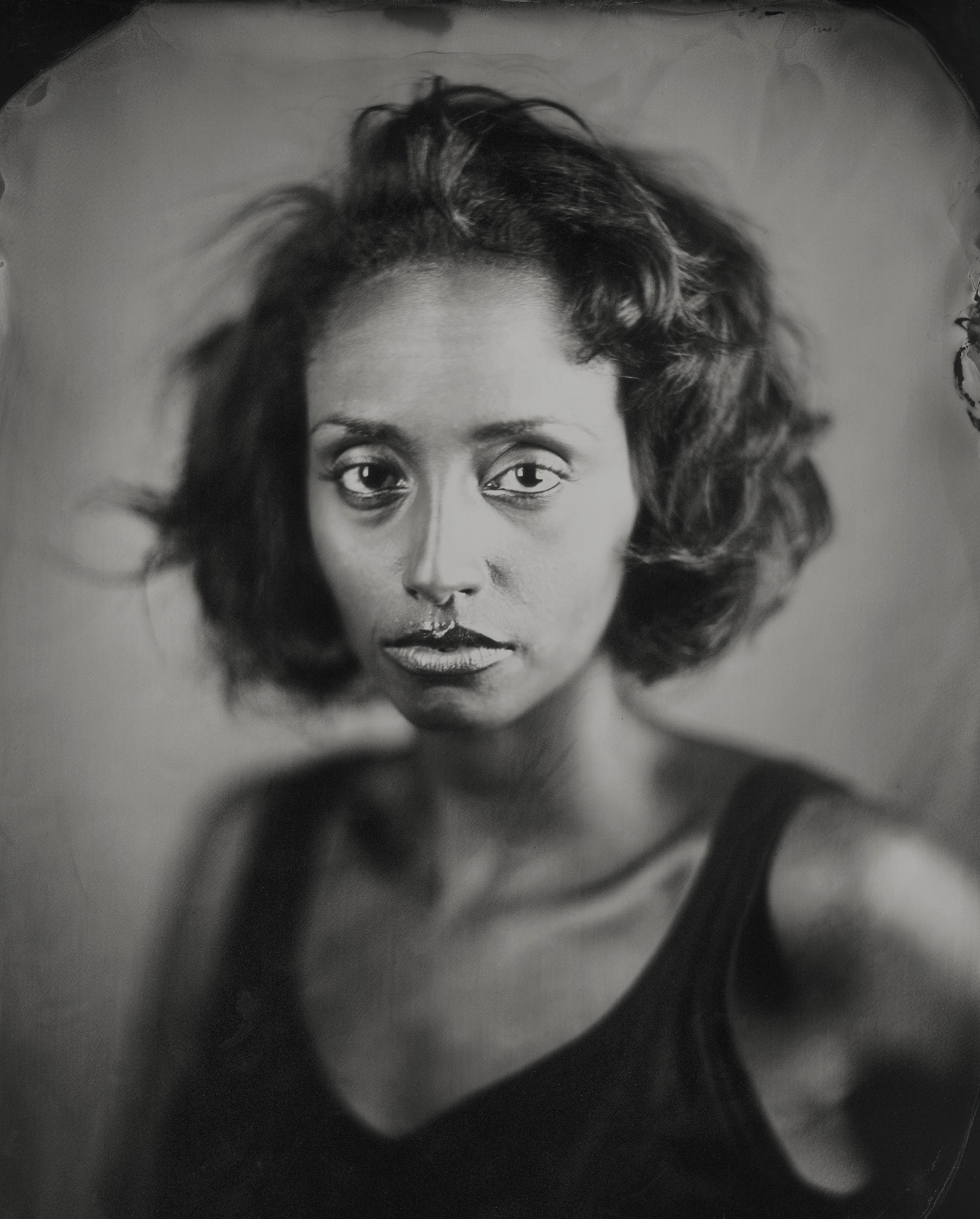 This exhibition will be open July 5-19 in the Jeremy Efroymson Gallery.
In June 2019, Anderson-Staley set up her tintype studio at Tube Factory and made 70 tintype portraits over a four-day period. This exhibition showcases portraits made during Anderson-Staley’s visit to Indianapolis, as well as subjects photographed in other American cities from New York to Cleveland to Houston to San Francisco. A selection of historical tintypes from the collection of the Indiana State Museum and Historic Sites provide context for the modern portraits and show how the medium shaped our identity as a state and nation from photography’s earliest days.
To make a tintype, a light sensitive collodion emulsion is mixed and poured onto each plate shortly before a portrait is made. Tintypes need long exposure times, so the subject must remain completely still for up to 30 seconds to produce a sharp image. People sitting for tintypes often don’t smile, as it is difficult to hold a smile perfectly still for the length of the exposure.
Unlike the instantaneous digital selfie of today, a tintype portrait is an intimate collaboration between the photographer and the sitter, resulting in a one-of-a-kind portrait and experience. These portraits are rich in atmosphere and detail, emphasizing an often intense and mesmerizing gaze. Anderson-Staley’s beautifully textured tintype portraits use 19th-century technology to depict the wholeness of what “American” means today.
Keliy Anderson-Staley was raised off the grid in Maine, studied photography in New York City, and currently lives and teaches photography at the University of Houston in Texas. Her images are in the permanent collections of the Library of Congress, Cedar Rapids Museum of Art, Portland Museum of Art (Maine), and Museum of Fine Arts-Houston. Her work was published in a solo issue of Light Work’s Contact Sheet and has been shown at the National Portrait Gallery of the Smithsonian, SFO Museum, Akron Art Museum, Bronx Museum of Art, Southeast Museum of Photography and the California Museum of Photography, as well as at a number of non-profit art institutions and galleries around the country. In 2016 she completed a major public commission for the city of Cleveland, producing fifty large-scale portraits for installation in the airport tunnel of the rapid transit line. A book of her portraits, On A Wet Bough, is available from Waltz Books. She is represented by the Catherine Edelman Gallery.

Founded by local artist-photographers, Adam Reynolds, Craig McCormick, and Mary Goodwin, Aurora Photo Center serves as a creative bridge between artists and the greater photographic community with a regional, national, and international perspective. Aurora will be a place where artists meet, create, share work, and find inspiration.

In its first year, Aurora will focus on awareness of photography as a medium for art and social expression. By hosting partnerships and pop-up-style events, Aurora will work to build a community in central Indiana around the medium of photography through exhibits, conversations, and workshops. As Aurora grows and receives non-profit status, it will establish a dedicated gallery space, along with darkroom and studio facilities for both community education and working artists.

“Photography was once a medium permanently documenting history, family, and places. Today it is a momentary medium ruled by innuendo,” says Craig McCormick, Aurora co-founder. “Through Aurora, we hope to explore how photography becomes art in fast and slow times.”

Partnering with Big Car Collaborative in the Garfield Park neighborhood, Aurora’s inaugural event will feature Anderson-Staley’s ongoing tintype portrait series, [hyphen] American. Based out of Houston, TX, Anderson-Staley has spent the past decade travel- ing the country with a portable 19th century tintype studio capturing a typological portrait survey of the human faces that make up today’s America. Her next stop is Indianapolis, where she will be holding a tintype workshop and portrait sessions open to the community, followed by a curated exhibition of her tintype portraits from Indianapolis and beyond.

“Keliy’s project is an open invitation for Indianapolis to come together in a collective portrait of our city,” says Aurora co-founder Mary Goodwin. “It gives us a chance to re-examine what it means to be ‘American’ today.”
[hyphen] American will be on display in the Tube Factory’s Efroymson Gallery July 5-26 with an opening reception on July 5. Keliy Anderson-Staley will be in Indianapolis June 13-16 making tintype portraits. She will host a workshop on tintypes on June 15.