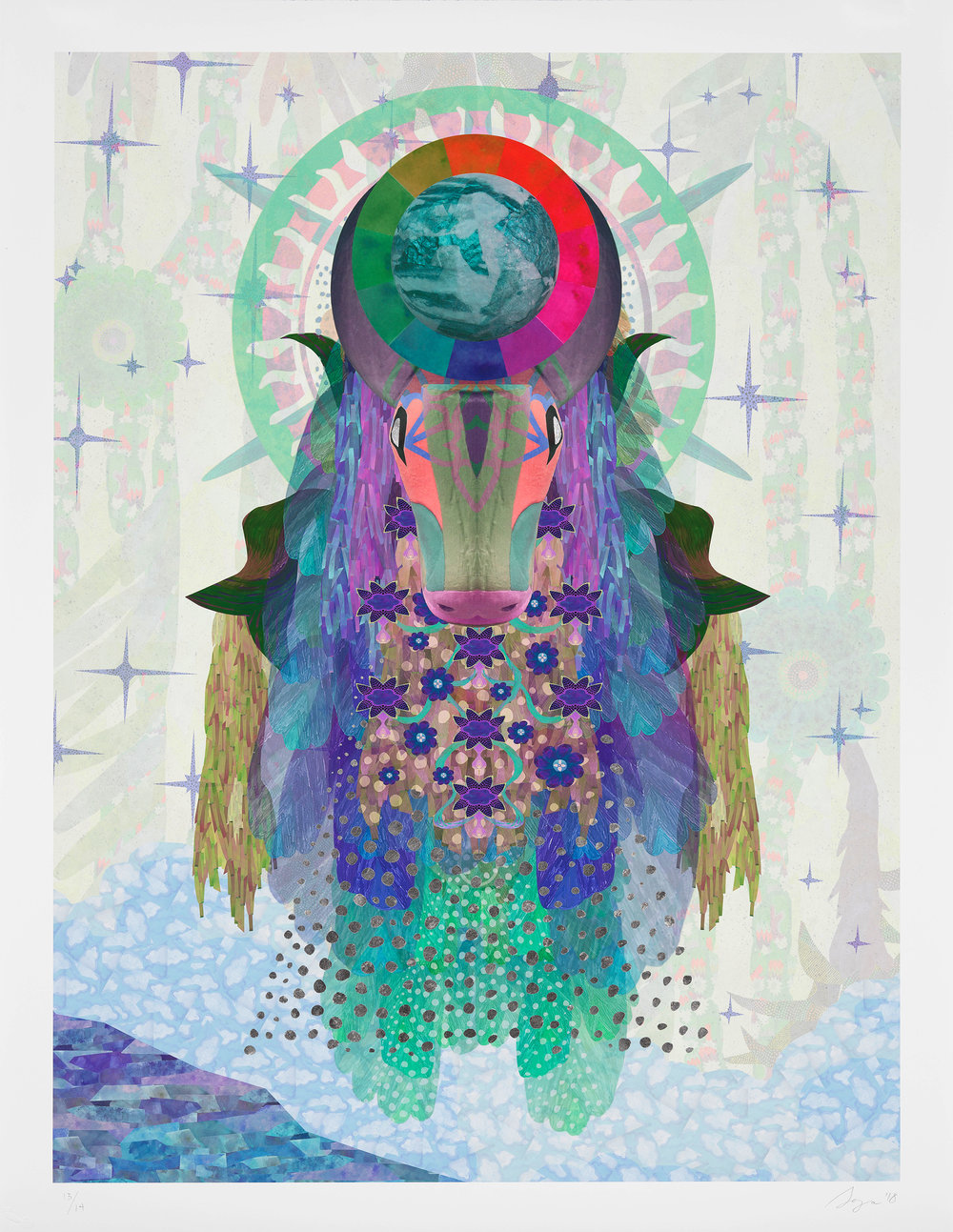 In this new exhibition, New-York-based multi-media artist Saya Woolfalk explores our understanding of the human condition — a state of affairs governed by seemingly unavoidable conflicts such as birth, growth, and death. This show explores how technology has allowed us to ease our suffering by making change less difficult and transformation more enjoyable. Perhaps the ultimate human technological advancement would be the elimination of mortality by extending human life indefinitely in a biological, digital, or other virtual state. Recent advances suggest our species may already be on the cusp of achieving this evolutionary landmark.

Woolfalk’s exhibit at Tube Factory includes her signature installations, sculptures, prints, video art works, and the works of artists who influence her practice. It builds on one of her first projects, No Place (a play on the translation of the word utopia), where she collaborated with filmmaker and anthropologist Rachel Lears. Both then in their mid 20s, they invited people into Woolfalk’s studio to talk about their ideas of utopia and created work from there.

“Similar to the way you would construct a folktale, we took these ideas and we constructed the culture of the NoPlaceans. People would come to the studio, put on costumes and enact the things that they were imagining,” says Woolfalk who created a six-chapter ethnographic film about this future utopian world based on people’s visions.

To explore the conceptual boundaries of this cultural moment, this also led Woolfalk to create a fictional transhuman species known as the Empathics, which she describes as a race of women who are able to alter their genetic make-up and fuse with plants. “If you have a utopia, then how do you actually make that utopia real? I worked with biologists at Tufts University to think about what in nature could occur in order for people to mutate to become more like plants.”

Woolfalk’s Tube Factory installation will extend the story of the Empathics, blending multi-media aesthetic phenomena, spirituality, cultural hybridization, capitalism, technoscience, and artificial intelligence to conjure a broad network of interconnecting philosophical strands. Informed equally by science fiction and anthropology, the morally ambiguous future that the exhibit shares is open to the interpretation of its viewers. “Going from modularity to monumentality is how I approach my practice. I work in ways that are incredibly small and I also work in ways that are incredibly big. The work functions like collage.”

Should we fear the world Woolfalk and other transhumanist artists are mapping? Should we embrace it? Should we shrug it off as a Pollyannic fantasy, doomed by the human idiot factor? Woolfalk seems to be implying a potentially disturbing fourth option: Some of us — particularly those with special status or outlandish means — have already started to transform. Is this art, or a warning shot across the cultural bow of the human race?

Woolfalk (b 1979, Japan) is a pioneer within an emergent, international aesthetic movement examining transhumanism — a theoretical belief that humans will mobilize technology to transcend their biological limitations and evolve into a non-human, or “posthuman” race. With each body of work, Woolfalk continues to build the narrative of The Empathics and questions the utopian possibilities of cultural hybridity. She has exhibited at museums, galleries, and alternative spaces throughout Asia, Europe and the United States including solo exhibitions at the Montclair Art Museum, Montclair, NJ (2012); the Chrysler Museum of Art, Norfolk, VA (2014); the Asian Art Museum of San Francisco (2014); SCAD Museum, Savannah, GA (2016); Everson Museum of Art, Syracuse, NY (2016); Sheldon Museum of Art, Lincoln, NE (2016); the Mead Museum of Art, Amherst, MA (2017) and group shows at the Studio Museum in Harlem; MoMA PS1, Long Island City, NY; the Warhol Museum, Pittsburgh, PA., the Museum of Contemporary Art, Chicago, among many others.

“When I started making work it was very important that it was not autobiographical,” says Woolfalk. “The work is not about me at all. The work is about talking to people about their ideas and trying to understand what’s going on in the world then taking that material and adapting it into installation based spaces that people can experience.”

Made possible by The Andy Warhol Foundation for the Visual Arts and The Efroymson Family Fund.

Part of the Social Alchemy Series, this exhibition is in partnership with the New Harmony Gallery of Contemporary Art.