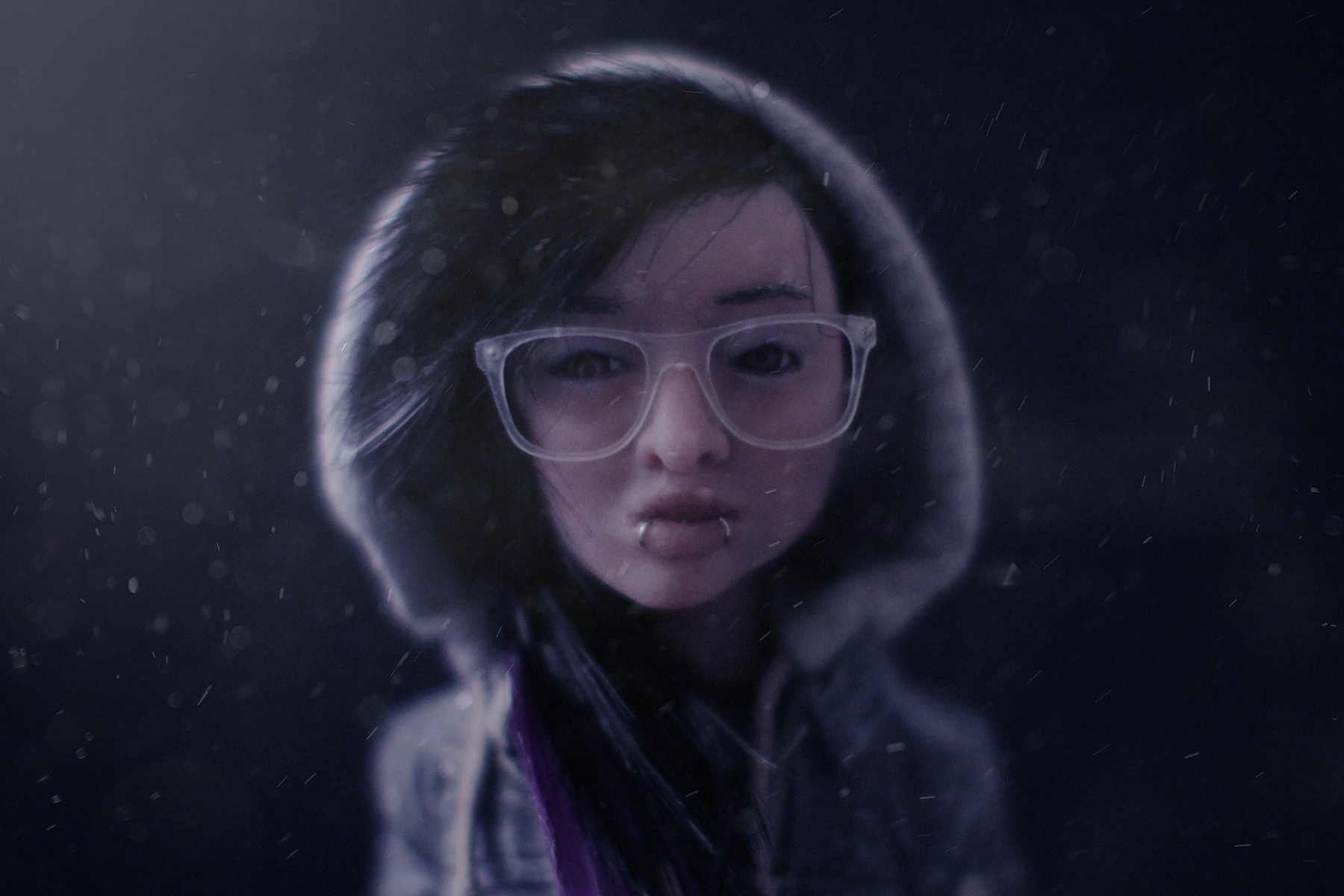 “Biidaaban”
In Amanda Strong’s astonishing short film, Biidaaban sets out to harvest sap from sugar maples in urban Ontario neighbourhoods. The practice of harvesting sap to create syrup goes back to time immemorial for the Anishinaabe, people but the lands have since been covered over by urban development and occupation. Biidaabaan can see the traces of the people, creatures, land and time as they work to continue in their ancestors’ movements. Biidaaban is a young Anishinaabe gender non-binary person that can see through multiple dimensions while existing and moving in their present time and space. They are sometimes accompanied by their friend Sabe (a 10,000-year-old shape shifter who some have called a Sasquatch), Ghost Caribou, and Ghost Wolf — but only Biidaaban can see them. They act as reminders of what exists in this space and provide lessons about honesty, humility and working for the people.
19 minutes 14 secs
“Four Faces of the Moon”
This animated documentary follows the journey of an Indigenous photographer as she travels through time. She witnesses moments in her family’s history and strengthens her connection to her Metis, Cree and Anishnaabe ancestors. This is a personal story told through the eyes of director and writer Amanda Strong. The oral and written history of her family reveals the story — we witness the impact and legacy of the railways, the slaughter of the buffalo and colonial land policies.
12 minutes 54 secs
About Amanda Strong
Amanda Strong is an Michif interdisciplinary artist with a focus on filmmaking, stop motion animations and media art. Currently based on unceded Coast Salish territories also known as Vancouver, BC, Canada. Strong received a BAA in Interpretative Illustration and a Diploma in Applied Photography from the Sheridan Institute. With a cross-discipline focus, common themes of her work are reclamation of Indigenous histories, lineage, language and culture. Strong is the Owner/Director/Producer of Spotted Fawn Productions Inc. (SFP). Under her direction, SFP utilizes a multi-layered approach and unconventional methods that are centered in collaboration on all aspects of their work.
Strong’s work is fiercely process-driven and takes form in various mediums such as: virtual reality, stop-motion, 2D/3D animation, gallery/museum installations, published books and community-activated projects. Strong and her team at Spotted Fawn Productions are currently working on the research and development of bringing these works into more interactive spaces.
Most recently she was selected by renowned filmmaker Alanis Obamsawin to receive $50,000 in post-services through the Clyde Gilmour Technicolour Award. In 2016 she received the Vancouver Mayor’s Arts Awards for Emerging Film and Media Artist. In 2013, Amanda was the recipient of K.M. Hunter Artist Award for Film and Video. Her films have screened across the globe, most notably at Cannes, TIFF, VIFF, and Ottawa International Animation Festival. She has received grants from the Canada Council for the Arts, Ontario Arts Council, BC Arts Council and the NFB. Spotted Fawn Productions is currently developing new short animations Wheetago War and Spirit Bear. SFP’s latest short animations Biidaaban (The dawn comes) Four Faces of the Moon and Flood are available online through CBC Short Docs and CBC Arts.
Masks are required. Made possible by the Andy Warhol Foundation for the Visual Arts.
+ Google Calendar+ iCal Export