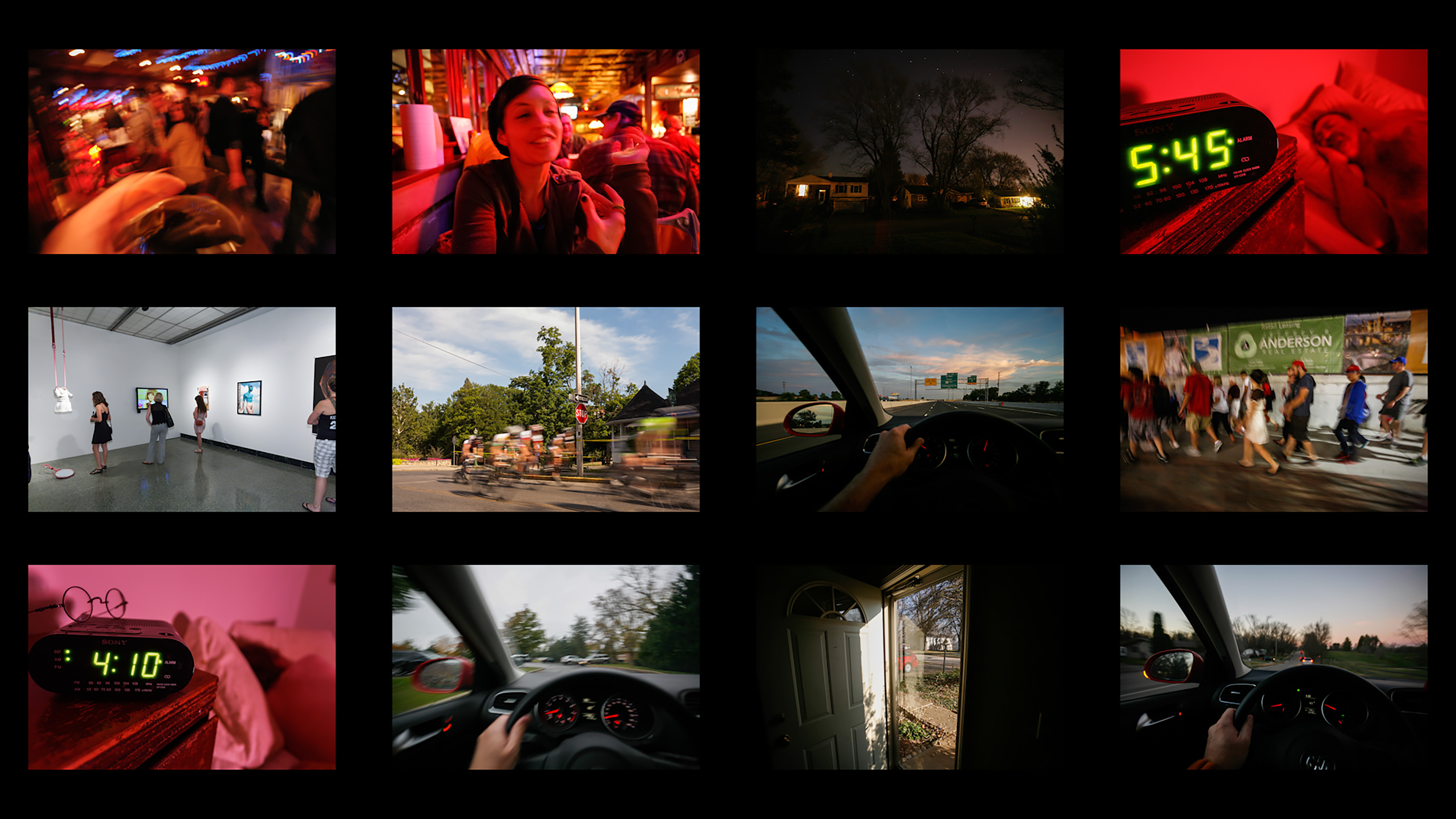 Time. How do you perceive it? Is it fleeting or does it seem to go on forever? When did you first become aware of “time”? Do the minutes, hours, days blend together? Are the memories of events just as vivid now as when they actually occurred? Do memories play a significant role in what time means to you?
Where does the “time” go? Is it measured in the outcomes of our daily routines or in the singular outliers, the spectacular moments that occur irregularly and unexpectedly? This piece reveals my regimented routines over the course of a single year. When interacting with the piece, these routines become patterns. When the patterns change, the viewer is left to consider the reason why.
The images presented are my visual memories of events. In watching the piece, viewers have the opportunity to consider the past and the future simultaneously, to see the outcome before the event has actually occurred. The entire year (2012) is presented as a grid, with each image representing a day in each month of the year, starting at approximately midnight on the first day of each month and continuing to the final day of the month. From left to right, January through December is presented in its entirety until each fades into darkness. By de- constructing how a visual representation of a year is normally presented, the viewer visits an abstract representation of that year. Ultimately, a year of my life is presented in an hour, offering the viewer an opportunity to participate and find meaning in my mundane activities while simultaneously reexamining their own unrecognized minutes, hours and days.
366247•2012 is a time-based piece, rooted in still photography, and can be presented as a video or video projection installation. The more than 256,000 still images, presented as a photographic stop-motion animation, allow the viewer to witness my day-to-day routines, the same acts that everyone engages in on a regular or daily basis.

Kevin O. Mooney (b. 1957) is an educator and fine artist as well as a successful commercial photographer. He received his BS from Southern Illinois University and his MFA from Indiana University Bloomington. Mooney has been the recipient of Artist Fellowship from the Illinois Arts Council in 1987. His photographic work is included in collections at the Museum of Fine Arts, Houston, Kinsey Institute in Bloomington, Indiana, the Illinois State Museum in Springfield, Illinois, Central Washington University in Ellensburg, Washington and the Eastman Kodak Company in Rochester, New York. His work has been exhibited at the MFAH, Catherine Edelman Gallery Chicago, Pictura Gallery at FAR Center for Contemporary Arts, Grunwald Gallery of Art, Gallery 312 and the Chicago Architecture Foundation as well as internationally at the Lee Yongjae Architects’ Window Gallery, and the Seoul Lunar Photo Fest, Lunar Photo Night Seoul, Korea. His project, 366247•2012 was just chosen by Center Santa Fe for the 2019 Excellence in Multimedia Award. His current work continues to investigate self, consciousness, and individuality through sequentially presented still photographs arranged as a stop-motion animation. He blurs the edges between various disciplines within the photographic field as well as those between photography and other digital media.

The exhibit runs through February 22 in the Jeremy D. Efroymson Gallery.

Made possible by the Arts Council of Indianapolis, Sun King Brewery and Ash & Elm Cider Co..